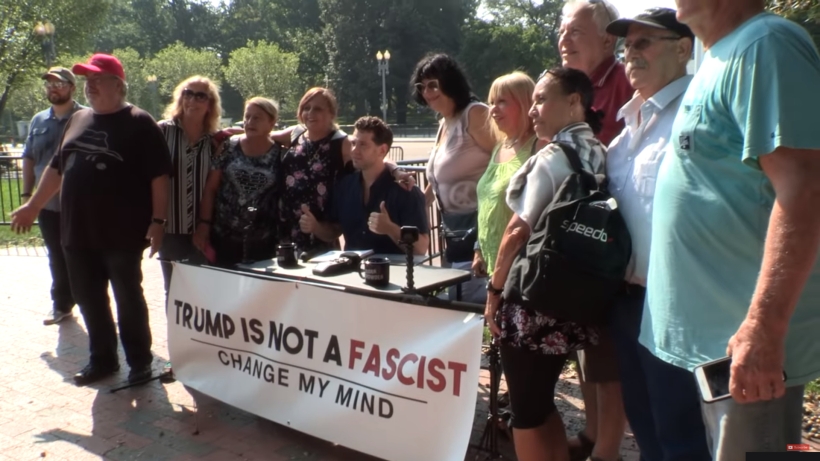 Change My Mind is a popular segment hosted by Steven Crowder, a right-wing comedian. (Yes, they exist.) The basic idea is to have unedited and civil debates with normal people off the streets about common topics of interest like gun control, gun control, the wage gap, etc. Crowder sets up a table in the middle of a busy area, in a location where people who oppose him ideologically are bound to gather, so he’s at college campuses a lot.  Crowder’s stances often lean anti-gun control, pro-immigration laws, anti-abortion, and pro-capitalism. His table would normally have a banner with the topic of the day displayed on it. But something peculiar happened in his latest outing where he challenged people to change his mind on whether President Trump is a fascist.

In fact, Crowder ran into a somewhat unexpected obstacle. Turns out that, despite what every Hollywood celebrity and news outlet tells you daily, Trump still has a lot of support. So much support, in fact, that as Crowder eagerly looked for someone to debate with…he found the crowd around him was mainly composed of two types of people. A handful of cowards who were content to scream and monologue rather than discuss (so your typical Leftists) and a whole bunch of people who loved Donald Trump.

It gives you a little taste of the heavy media bias saturating US news outlets. According to CNN, Trump is the most hated President in history. But when you step out into the real world, we see that isn’t quite true.

And as for the show?

Crowder, of course, eventually found a few people willing to sit down for a discussion. Now, you might be asking how that went. Well, I won’t spoil it video, but Crowder opens each discussion by asking them to read the definition of fascist right out of Webster’s dictionary. How do you THINK it went?