I think America should have its own version of Doctor Who. Now hold on, because that opinion actually isn’t as crazy is it might sound. America has had a long history of adapting the best Britain has to offer and developing an all American version. For example, shows like The Office, Shameless, and House of Cards all started off across the pond. And with the show Elementry, we’ve even given the great Sherlock Holmes the American touch. So why not Doctor Who?

Naturally, there would be a few things to consider. When America adapts a show from the UK, it completely repackages it and starts it fresh – a brand new show. But Doctor Who has over 50 years of history. 50 years of adventures. So, should an American version of one of Britan’s most iconic shows be a continuation of these adventures? Well, in my opinion, absolutely not.

An American version should, without a doubt, start from scratch. The writers will still be free to utilize all the classic villains from the franchise, but now the audience can get introduced to the world of Doctor Who without all the baggage. Even better, the writers wouldn’t be bogged down with decades of continuity. And the best thing for the writing staff would be the freedom to do anything. They can do whatever they want without tampering with the original franchise.

So who do I think should play the 1st Doctor in this new American version of Doctor Who? The Rock, obviously. 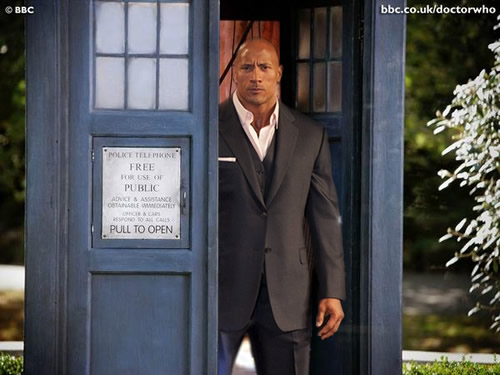 Why Dwayne “The Rock” Johnson?

America’s rendition of Doctor Who can’t just be a copy and paste job. After all, the American House of Cards did an excellent job giving the show it’s own distinctly American themes and motifs while still keeping the original premise.

Having a wise old man who tries to outthink his enemies rather than outfight them might be good for a British show, but that particular aspect shouldn’t remain completely the same – as Childish Gamino once elegantly put it: “this is America.”

When something is Americanized, the show usually adds in more sex and violence. So, in an American Who, we should probably expect the same treatment. And let’s face it, the evolution of the new British Who series has already been dabbling in more sex/violence already.

An American Doctor would probably be a lot more hands-on, demanding the role be more physical for the actor. There will probably be a heavier emphasis on action. House of Cards had Frances Underwood personally murder a guy. Breaking Bad even had a character dying from cancer blow things up and get into gunfights. Those are two critically acclaimed shows. The American Doctor could easily be both a fighter and a genius. Imagine if Jack Bauer was a Time Lord and traveled through the universe fighting evil conspiracies and terrorist plots. Something like that.

Another uniquely American theme might be the Doctor’s position as the policeman of the universe (punctuated by his police box) since America is often described as the world police. Picture an episode where the Doctor has to decide whether he should get involved in a situation or decide whether or not he should always help – or are people sometimes better off solving their own mistakes? Is his presence doing more harm than good? That sort of thing, which brings us to another interesting aspect.

The new Doctor Who in the UK plays the Doctor as an expert – someone who already knows everything. An American reboot would give us a chance to see The Doctor as a novice. See him make mistakes. Let us watch the Doctor fumble his way to victory…and watch his failures.

Remember the first episode of Scrubs? J.D, the main character, comments on all the years of training he had become a doctor, only to arrive on his first day feeling as if he didn’t know anything. The American Doctor could begin his series with a similar overwhelming experience. The Doctor, fresh out of the academy and eager to save the universe. There are so many options to explore. A whole new foundation to build. There’s a lot a reboot could do that the original British version can no longer do (at least not without some extreme contrivance.)

So should there be an American Doctor?

One thought on “Should There be an American Doctor Who?”