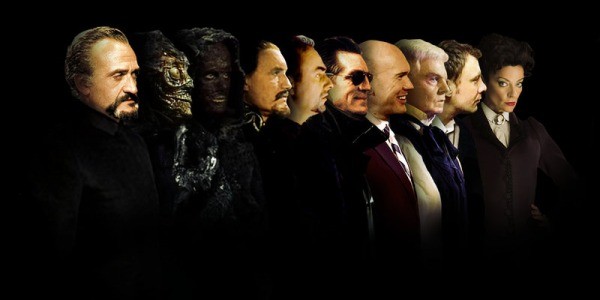 Every good hero needs a good villain. Superman had Lex Luthor, Sherlock had Moriarty, and The Doctor had, well the Daleks, but he also had The Master. Someone who’s on the same level as The Doctor, a Time Lord, and just as brilliant but with far fewer scruples.

As a follow up to the Should There Be An American Doctor Who? – which actor could possibly stand opposite The Doctor played by Dwayne “The Rock” Johnson?

Well, let’s look at what happened when The Master was re-introduced during the 10th Doctor’s run. This was during the Davies era. They seemed to write The Master as a more sinister Doctor. He’s witty, energetic, and quirky – the only real difference is his lack of a moral compass. While I think the American Doctor should be fun and energetic, similar to the British Doctor, just with a more American flare. I think the Master should be treated a little differently.

The one thing I quite liked about the new era’s Master, was how the writers managed to keep him sympathetic while maintaining a powerful level of malevolence. Maybe an American version of The Master should be more of an adversarial complement than a dark reflection. In other words, Davies’ Master was an evil Doctor. I’m suggesting that the American Master be the Doctor’s opposite in personality as well as ethics.

The Master could be reserved. More of a cold, calculating individual with designs for power and recognition. The actor should be able to give an air of malevolence while also remaining sympathetic. And while a lot of that depends on the writing staff and how well the character is written, it also falls on the actor to portray it convincingly and organically. So my top pick for the American version of The Master is…Kiefer Sutherland.

Sutherland has played many roles, from Jack Bauer in 24 to Dr. Schreber in Dark City. Every time, Sutherland can balance harsh with light. He acting style would perfectly fit with a dark and brooding Master while also hinting a hidden sadness behind his overt madness.

Davies run on Doctor Who, and Moffat after, played up the old friendship between The Doctor and The Master. However, I’m convinced that had there been less continuity to keep up with the show could have been allowed to spend more time developing the relationship between the characters. While the impact during the new Who was powerful, I don’t think it was delivered with its full capacity. If American Who were to begin its own continuity from scratch, they could unlock whole new opportunities. Who knows how far a fresh start could allow the writers to take their troublesome love/hate relationship.

The Rock VS Jack Bauer….place your bets.

(Now all we need to do is bring this whole thing to life.)