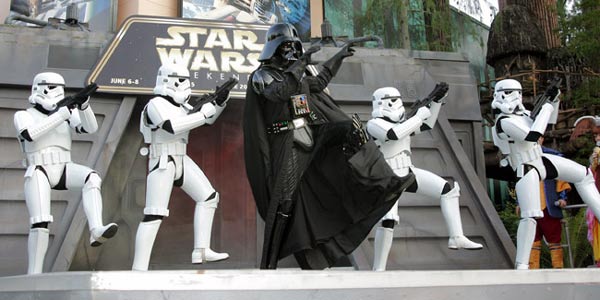 Something is rotten in the state of Star Wars. Everyone knows that Star Wars: The Last Jedi wasn’t so much a terrible sci-fi movie as it was a terrible propaganda film – it was also a terrible movie. And anyone who said it was good is either lying or…lying. We all know that. HOWEVER…in April The Last Jedi was sitting at a 47% approval rating – which, much like that one friend who’s always asking you for money, seems suspiciously high. Maybe that’s because a flood of activists had thought it their solemn duty to rate 5-Stars on a sci-fi movie they probably didn’t even watch. And now something similar might be happening to the new show Star Wars: Resistance.

When Disney took over the Star Wars franchise some idiot immediately put the wheel in the hands of a feminist – you know, those women who had their first period and then never stopped? (Or stopped talking about it) Ever since then, the films have been more like left-wing propaganda movies stuffed with weird out-of-place humor that reluctantly adding in sci-fi elements. And I don’t know about you, but I’m not willing to pay for someone to guilt me into thinking something – I mean going to church is free.

Ever since Star Wars became a lame duck mouthpiece for the mentally disturbed, consumer confidence has dropped immensely. This drastic drop may have contributed to the latest in a long line of cover-up operations where Disney Star Wars tries to hide its history-making failures.

>1,000 FAKE ⭐⭐⭐⭐ reviews for #StarWarsResistance have been put on @RottenTomatoes. 84% of the 1.3k Audience Reviews are fake. Lucasfilm is trying to suppress #StarWars fan criticism. pic.twitter.com/gNg8Q6bRN5

So, is this true? Disney Star Wars can’t let the franchise fail for several reasons. First, would be money. Disney paid a hefty price for the rights to Star Wars. But also, if Star Wars fails then that means their agenda fails – that means when they jab at the patriarchy, evil white men, and capitalism it’s not hurting anyone. And if their propaganda machine isn’t hurting anyone Trump wins. And they can’t have that…