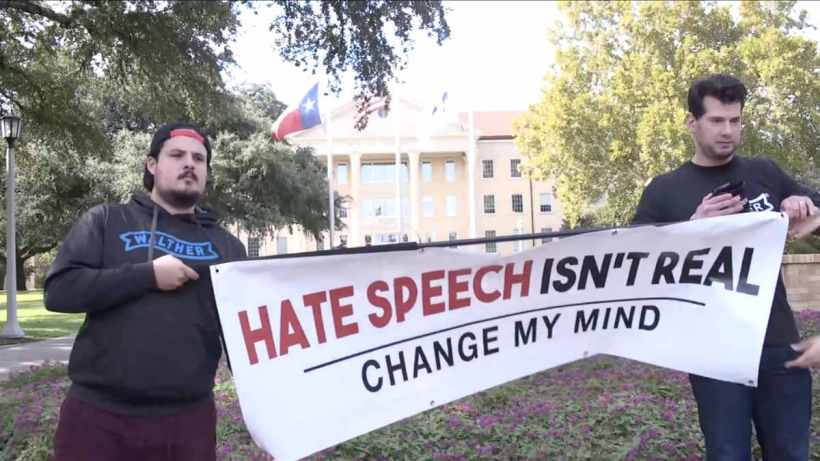 Earlier this month right-leaning comedian Steven Crowder came out with yet another brilliant episode of his hit series: Change My Mind. For those not in the know, this is where Crowder sets up shop and has real and unedited conversations with real people about political/social issues – the objective being to engage in a rational, open-minded discussion with someone he disagrees with in the hopes of getting his mind changed. This episode was a return to the subject of free speech. One combatant, in particular, gave a terrible yet concerning argument in favor of speech regulation.

A girl volunteers to debate Crowder who announces that she’s part of the college debate team. To be fair, she actually agreed with Crowder on most points about free speech except one major issue – she wants to legislate certain speech. Guess what kind of speech she wants to regulate?

By this point, Crowder has already explained what few left-wing activists never seem to know – that calls for violence is not protected speech. For example, you can’t call for the death of Donald Trump and expect to use the First Amendment as cover. That’s considered an action. That’s also why verbal threats can have legal reproductions.

The student’s proposition focused on “hateful” speech that indirectly inspired violence. For example, if someone says something demonizing the Jews – another person hears it and is inspired to shoot up a synagogue – the original person should be held legally accountable for inspiring the crime. Yes, I realize how dangerously idiotic this is.

Just like many modern left-wing propositions – it’s inspired by an immediate need. One person said something bad about black people so we need hate speech laws. They never seem to consider how dangerous these propositions are. It’s like their foot fell asleep and they hate the tingly feeling, so they decide to cut it off.

Legally, in the American legal system, it has to be a law that applies to everyone under one baseline definition. And the baseline for her proposal boils down to: People should be held legally responsible for their speech if that speech inspired a violent or an otherwise illegal activity. In her mind, this was just centered around white supremacists saying that all other races are evil. But if people are held legally responsible for the actions their speech inspires – it’s going to get much crazier than sending a few racists to jail.

Inspiration is something our minds generate. Fifty different artists can look at one painting and come up with fifty different meanings behind it. There are also crazy people who get the weirdest inspiration from the most mundane things.

What if an actress announces she’s getting married and some crazy fanboy hears it and is inspired to murder the actress’ future husband along with his entire family. Should the actress go to jail? After all, her words inspired a man to commit several murders.

What if you tell a joke making fun of another race – then some other guy hears it and thinks that it may be funny, but you also had a point, so he goes out and kills a member of that race? Say goodbye to your life – you’re going to jail. And it goes further than that. Plenty of things are considered speech that don’t refer to the spoken word.

Should J.D. Salinger be held legally liable for the death of John Lennon? According to the student’s proposal, he should be.

But she doesn’t hold a candle to the very last guy, who apparently hopes that one-day mankind will evolve enough to where we will be ready to toss away our rights. Yes, really…

Free speech is our greatest weapon in an orderly and peaceful society. Only a fool would stop an enemy from telling you what’s on his mind.