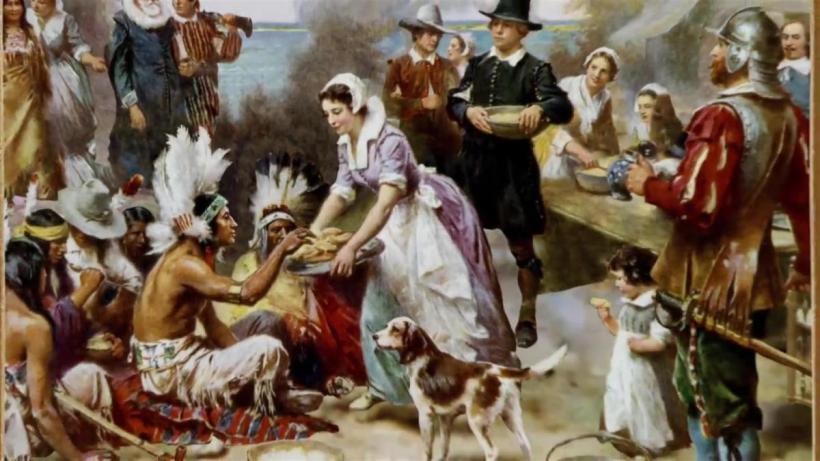 When it comes to big Holidays in America, you’ll always have that far-left downer who gives a whole speech about how evil that holiday, and America, actually is. How we’re benefitting from the suffering of other people and we shouldn’t be celebrating. Then, once they’re done enjoying their freedom of speech, and ability to drink coffee at Starbucks while enjoying free WiFi they go on to vomit their high pitched squeals onto some other poor guy. In the “progressive’s” point of view, American settlers are always the evil aggressors who destroyed the paradise, in which lived, the indigenous population. This is, of course, a lie.

As anyone who’s actually studied history would know, the story is never black and white. It’s rarely a clear-cut battle between good guys and bad guys.

Have you ever heard stories about the first settlers? It was awful. They could barely live through the night let alone wage a brutal war against the natives. Even the most common images of Thanksgiving we’re familiar with depicts the natives and settlers working in unison. The Thanksgiving story we know revolves around natives swooping in to save the dying settlers by teaching these silly Europeans how to grow their own food. (I guess these early natives were Republicans)

But when your blue-haired cousin with their Jean Paul Gaultier dress and well oiled curly mustache opens xim’s mouth – it’s always about how the white man came in and ruined everything. This is just laughably bad and romanticized propaganda.

Probably the biggest lie we run into is the foundation for the whole “we’re so evil” fantasy that progressives have. The story that early North America was a land of peace and that the natives all worked in harmony with nature and all that. The truth is quite different.

There’s a reason why different tribes of natives existed – because a lot of them hated each other. Native tribes constantly waged war against each other. And no, the reasons for these wars had nothing to do with some enlightened Tolkien-esque wisdom that they had. They fought each other for the same reasons Europeans fought each other: Territorial disputes, resources, or just plain old-fashioned revenge. I mean, do you really think people who became famous in western culture for taking a knife and slicing off the scalp of their slain enemy were really a people of peace?

The “honorable” and “wise” Japanese samurai used to do something similar. They took the whole head of a slain enemy and presented it to their leader. Why? Because if they killed enough people or killed someone important enough – they might get a promotion. Even common folk could get promoted to the Samurai class for bringing in the right head. This, of course, caused a lot of samurai to kill and backstab each other over high-value heads. Now they just do that over rare items on video games.

And these tribes did terrible things to one another. Anything from butchering women and children to roasting people alive to straight cannibalism. Though you’ll never hear your left-wing friend with the perm and stick-like arms mention that stuff.

In fact, native tribes hated each other so much that some of them jumped at the chance to ally with the European newcomers. Of course, your Starbucks loving friend might say that the white man, while scrambling to  survive and outnumbered by tens to hundreds of thousands, managed to conquer all the poor brown people (because no one has a lower standard of expectations of brown people than a left-wing progressive)

In reality, many native tribes offered friendship to the Europeans so they could form alliances against other native tribes. And considering how much more technologically advanced the Europeans were in comparison to the natives – this wasn’t surprising.

While the European settlers were sailing across entire oceans with their use of gunpowder and domesticated horses – the natives had yet to discover the wheel. Needless to say, Europeans were a highly valuable ally to have.

Okay so if the early European settlers were on friendly terms with some native tribes, why is your “progressive” friend with the exposed midriff, pierced nipples, and the mountain man beard telling you that the evil white man committed genocide on the natives?

Remember, this was around 1400 A. D. By this point, the Europeans had already survived horrible outbreaks of disease. They even suffered a similar circumstance when the Black Plague killed anywhere from 30% to 60% of people across Europe. And then, it kept coming back. So by the time settlers made landfall on North America, their immune systems were already grizzled veterans in germ warfare. Unfortunately for the native population, their immune systems were not so well prepared.

The Europeans brought germs and diseases with them that they no longer noticed because they had already adapted. The natives were making contact with people and with animals they’d never seen before. Now diseases that the “evil white man” had already adapted to, found a whole new vulnerable people it could infect.

So yes, the Europeans caused nearly every native to die off – but it was more because they had limited knowledge on how germs and diseases worked rather than an active push for genocide.

So when you’re sitting down for Thanksgiving dinner and your friend or cousin who thought spending tens to hundreds of thousands of dollars on a gender studies degree is trying to school you on economic responsibility – and the origin of Thanksgiving comes up, feel free to tell them you are 100% guilt free. You can also tell him (or it or xim or whatever) exactly why everything he’s spouting is completely wrong.