“Hi @Patreon – by banning Sargon of Akkad (depriving a father of his main source of income right before Christmas, how lovely) you are actually silencing a classical liberal who has debated & opposed the far-right innumerable times.”

Leftists are vile, wretched, psychotic, not to mention irredeemably ugly. They’re like the evil bottom feeding microbes that feed off the dead – constantly trying to break out down and failing right up until the moment they succeed. This time, Patreon has bent to the pressure of the rabid left – and this one might really hurt.

Just a few days ago – right-wing icon Milo Yiannopoulos attempted to start a Patreon account to help fund his comeback. Of course, Milo is so effective at dismantling the outrageous assertions of the left that he drew in the crybabies like flies to garbage. His account was removed within 24 hours.

While this may have been part of Milo’s plan to gain more notoriety in the press, the ever-rabid leftists had a taste of blood and began reporting accounts left and right.

Sargon of Akkad (Carl Benjamin) was the next to fall prey to the left’s endless barrels of hate. Sargon of Akkad is a YouTuber who rose to fame during the #GamerGate movement. He has since been amassed a large following of nearly 900,000 people. He became the founder of a new political party called the Liberalists and recently joined the United Kingdom Independence Party.

It’s known that Milo Yiannopoulos was banned from Patreon because of his past association with The Proud Boys (falsely labeled a hate group) As of right now, the specific reason Sargon of Akkad has been banned from Patreon is unknown – though it is very likely that Carl Benjamin’s ban may have something to do with his past affiliations with people like Yiannopoulos and his public political activities.

Before going down Carl Benjamin had a strong following on Patreon as well and was taking in nearly $12,000 per month.

It’s unknown if this loss was a permanent ban or just a glitch in the system. What might happen is a mystery – and so is who might be next.

“Hello all quick statement, everything is fine on my end please don’t fret. I still make money from YouTube so I will not go hungry just yet. I’m emailing Patreon and see what can be done about all this, because I think this is unjust. Failing that, I will I will work closely with alt tech to create alternatives and publicise them.”

In the wake of more information pouring in – it seems that this could have been a push by neo-nazi groups to trick the company into removing Sargon’s Patreon page. Carl Benjamin, regardless of any recent or past activity, has always been an ardent opponent of the movement known as the Alt-Right and of course the Far-Right.

Patreon has seemingly bowed to pressure from neo-nazis in its banning of Sargon. They brigaded and tricked @patreon into taking it down., Incredibly stupid mistake by Patreon. Must be reversed immediately. pic.twitter.com/ryGXOrdfpC

“Honestly, everything is fine, just make sure people are aware this is political.”

In the wake of his banning, Sargon of Akkad – an associate of Sargon Vee released a video where he discusses the event and makes the suggestion that the payment processing companies may have also pressured Patreon into dropping Sargon’s account. He recounts a similar event happening to James Allsup – another political YouTube personality.

While waiting for updates Sargon has posted the Community Guidelines of Patreon and affirmed that their rules on hate-speech do not cover things sound outside of Patreon – their terms only cover things discussed on the platform itself.

New update. It seems that Patreon has indeed given Sargon the cold shoulder. 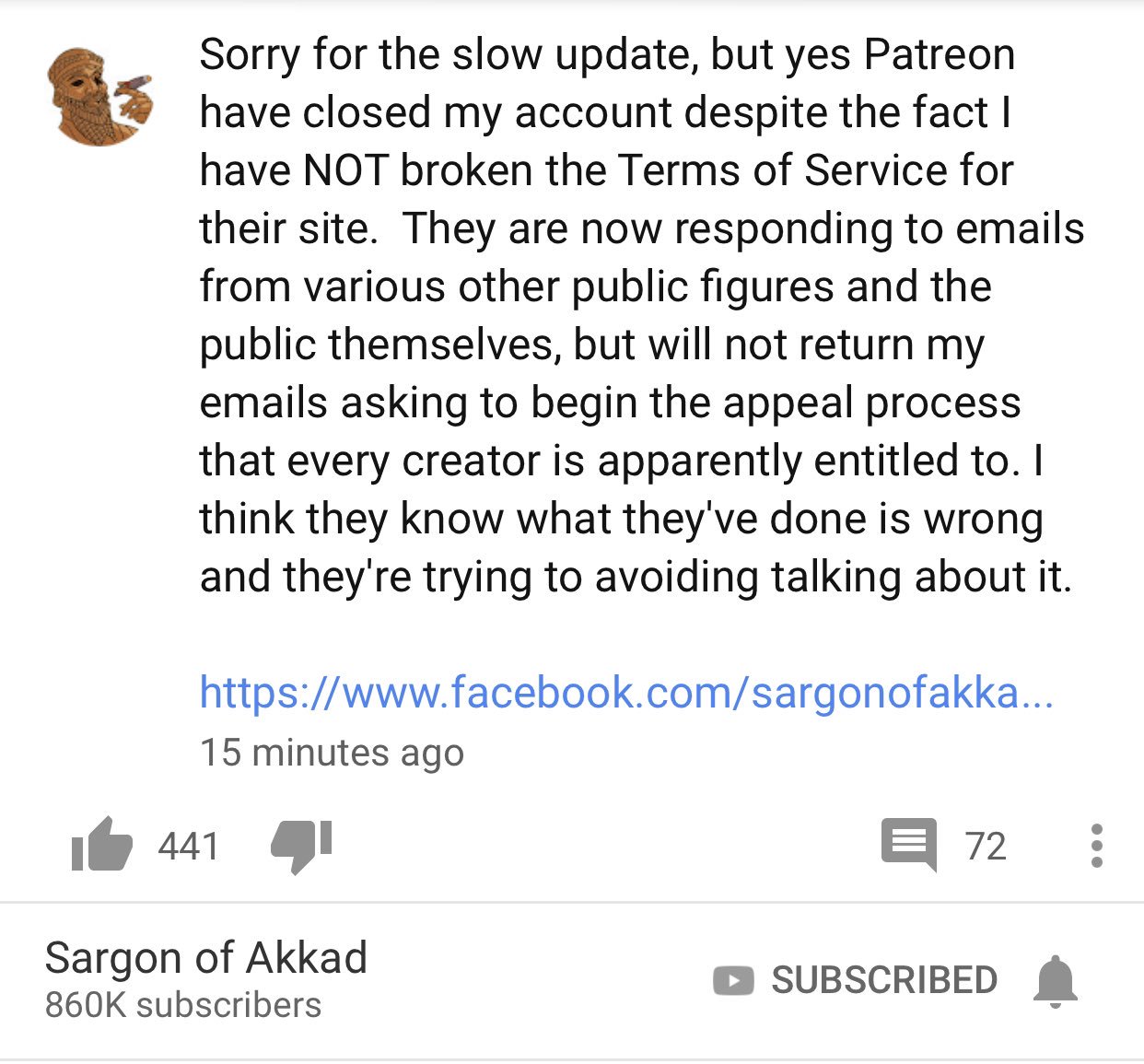 A patron of Sargon’s did reach out to Patreon – inquiring why the page was removed and got this as a response:

Well known, yet controversial, professor of psychology Jordan Peterson has announced that he may be joining the fray concerning the banned account of Sargon of Akkad. Jordan Peterson has had a rather meteoric rise to stardom starting with his refusal to obey a Canadian law he felt infringed on his right to free speech. His book 12 Rules For Life has sold in the millions and his speaking tour was seen colossal success. He also happens to have one of the largest Patreon accounts on the platform – ranging in at over $100,000 per month.

After learning of both Milo’s and Sargon of Akkad’s (Carl Benjamin) exile from Patreon he tweeted out this:

I'm doing everything I can to contact people in my circle and formulate a plan and response. https://t.co/9H0kbfEuvb

The results are unknown. Peterson has gained quite a bit of influence. It’s possible he could save Sargon of Akkad’s account. It’s likely nothing will happen. However…it’s also possible that Peterson could be expelled as well.

Sargon explains the details of what happened.

One thought on “Patreon Purge? Sargon of Akkad Gets His Account Banned (UPDATED w/ Peterson)”