When Patreon banned Carl Benjamin of Swindon (Sargon of Akkad) it sparked a huge backlash. Many supporters decided to jump ship after Patreon declared its obvious political bias against those who stand against Political Correctness. Even some creators have decided to close their lucrative accounts. Most notably – Sam Harris who had this to say:

In the wake of Patreon turning up the heat on those who don’t fall in line with the progressive point of view, many leftists and socialists have suddenly embraced the virtues of the free market. They laugh as Patreon takes funding away from their opponents and tell banned creators to just find another platform. In other words, the progressive movement is an authoritarian push. They will applaud anything that allows them free reign to silence their enemies.

Just like when Patreon decided to instantly ban Milo Yiannopoulos based on nothing but political bias. They used Milo’s past association with the Proud Boys as an excuse due to the #FakeNews that the FBI had labeled them a hate group. They did not. 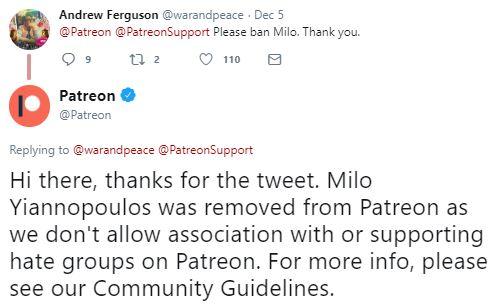 Sargon of Akkad indirectly led an exodus from Patreon to another platform called Subscribestar. And Subscribestar happily accepted the business Patreon was tossing away. But competition is not allowed where major platforms are concerned. Soon after Subscribestar became the new home of the “wrong thinkers” – other major companies decided to step up in order to crush Subscribestar into the dirt.

The socialists on the left laugh at banned creators because they were often the ones who preached for capitalism and the free market. They say that this is the free market at work. But it isn’t. Alex Jones was our warning of bigger things to come. This is collusion by major companies to stomp out the competition.

Patreon was the chosen one. The golden boy for crowdfunding platforms. So when Subscribestar became the next big thing – PayPal and Stripe immediately pulled their support in a coordinated effort to make it impossible for a company, who just wanted to do business without a set political ideology, to function. This isn’t a free market. This is a mafia: “Either do business with us, or you don’t do business at all.”

Basically, Mastercard and PayPal act as the Luca Brasi for other big companies. You don’t take the Godfather’s deal, they’re going to come beat up the guy you DID go with. They’ll put his head in your bed.

This is business collusion. They are many faces acting as one – and leftists are the useful idiots helping to protect this power because they’re using it to silence their enemies…for now.

This is a monopoly. And this conclusion becomes all the more eerie when you look back at an interview Patreon’s CEO had with Dave Rubin – where he confirms that CEOs tend to get together and help each other out.

But people are already fighting back. What happened to Sargon caused such a huge backlash – the news has broken the barrier and gone past the political sphere. There may even be grounds to sue bring legal charges against the company. But for now – the best thing to do is delete Patreon and move to Subscribestar – the platform who promised to do everything in their power to be the people to uphold free speech and operate with a fair hand.